Welcome everyone to Alpha 7! The big highlight of this patch is of course the release of the Halloween Event for 2022.  But it also contains many game features expanding the core functionality of the game. This blog post will summerize the changes, and a simplified change log will be written at the bottom.

Before today's update when you died Death would take a sizable chunk of change (based on your equipment and the quality of it).  This "Death tax" now been moved to the new Repair and Durability system, and in doing so the amount of gold taken when you die is less. 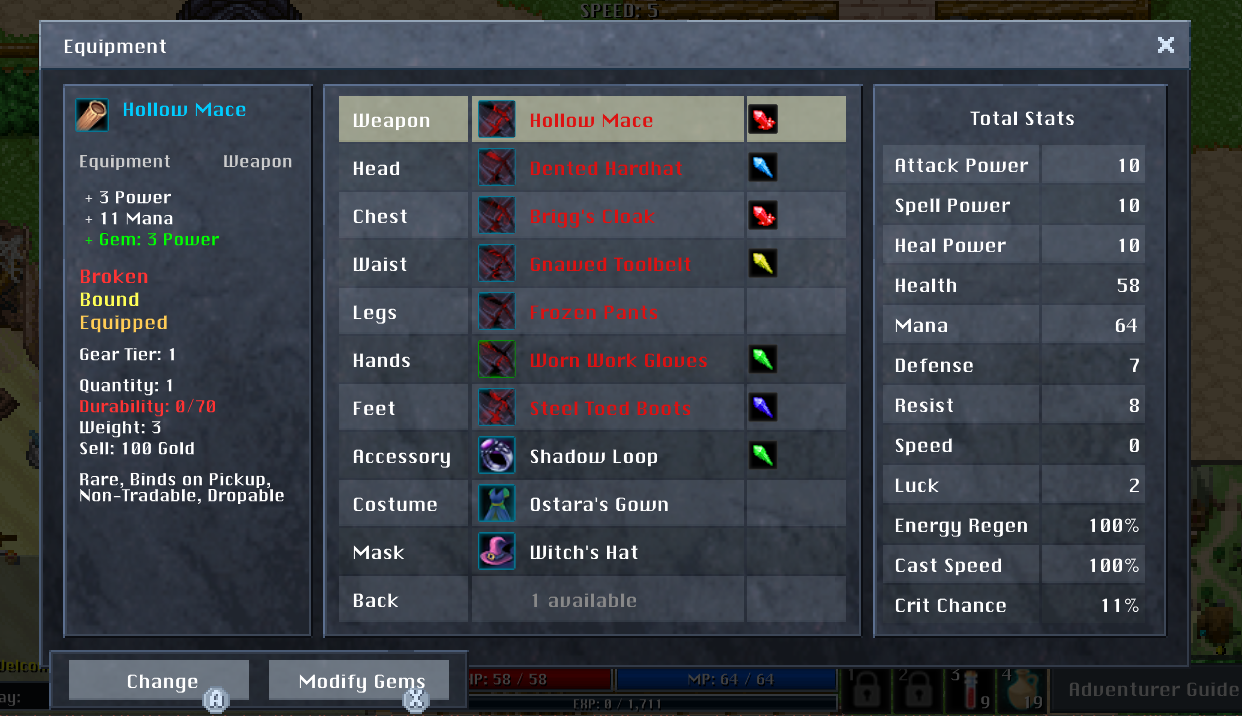 All items now have durability. Which is basically a value of how much damage it can take before it breaks. When an item breaks it can no longer be used, but it doesn't get destroyed forever. You will simply not benefit from its stats any longer. Well at least until you can go repair it.

Repairing gear is fairly easy. Just visit a blacksmith or select merchants around the world. Repairing gear costs gold, but not nearly as much as how much Death previously took each time you died.

Durability is reduced by 10% on all your equipped pieces of gear each time you die. And each time you take a critical hit a random piece of armor will take a durability point loss.

You may now use just a keyboard to do most things in the game.

Many question why Keyboard support has been a feature we have been working on for so long when, "the game already let's me use a keyboard". I would like to clear up this confusion now. Only a few select places had keyboard support previously. The point of this feature is to get keyboard support in all places. Keyboard support is also important because it is needed to support controller support.

The process of adding keyboard support was more than just mapping keybinds to every button, but also required us to figure out how U.I. components connected to each other. Imagine what would happen if you were to hit the left arrow key while on a specific button or list. Does it go to the next thing on the left? This may seem obvious, but some menus can get a bit confusing.

You may also use a controller to play the game! This is the first release of controller support and as such should be classified as experimental. As Mei said, "Controllers are finicky, every controller works a bit differently," fully supporting this feature will require many iterations and much more testing.  We also need physical controller hardware here at our studio to test every controller. There are so many controllers out there.   What we have done though is we are supporting the "Xbox" controller spec which seems to be an industry standard for most controllers.

What's still needed in the controller support department? We need to test more controllers and need to smooth out many interfaces to be more controller friendly. One suggestion made was to better label the battle screen for your controller. Also, Mei is passionate about adding user hotkey/binding management, so players can configure their controllers themselves. This feature should be coming out by Early Access or shortly thereafter.

The Social Menu finally makes it to Aether Story: you can finally have friends. By popular demand, I have finally added the friends list. This allows you to add other players to a listing that you can check if they are online, when they were last online, and easily message and interact wtih them.

Friends are not mutual. Meaning you can add anyone as a friend, and anyone can add you. You do not need to mutually agree to be friends. This is mainly because the system is a lot simplier to design this way.

The first version of Guilds have also been added to Aether Story! Wow! Much social. To create a guild visit the Clerk in the Domhan Outpost Command Hall and register a new guild for 10,000 gold. Or you may join someone else's guild. Use our Discord to find or recruit for your guilds.

The basic Guild functionality has been added, including: guild chat, guild tags, guild ranks, and guild message of the day.

In the future Guilds will provide new features and game play opportunities. Including guild storage, guild halls, guild perks and even guild pvp.

Log into Aether Story today and join in on the Halloween fun by visiting the witches in the Domhan Outpost.