Its been almost a month since the last update, and I can't wait to tell you guys what is new in Aether Story! Aether Story is our Indie Pixel Art MMORPG in development, which you can download today! Play Aether Story now for free!

Last month we reached our community goal, and thanks to everyone's contributions, together you guys unlocked Player Trading! So the first week of this month I worked on adding Player Trading to the game.  As a bonus to this funding goal, I also reworked the random Illegible Teleport scrolls.

And that's not all! We also got weight into the game this week, and ton of bug fixes. Keep reading to learn more!

Player Trading is a feature that the community voted and funded directly in the month of April 2020.  This feature adds the ability for two players to exchange items with each other.  This exchange has many protections in place to avoid abuse.

Player Trading begins when two players are near each other (within 6 tiles), and one player types into chat the command: "/trade Peg", where Peg is the other player's name.  Peg is then prompted with the option to join the trade or reject it.  If Peg agrees, then the Player screen appears.

Note: there will be player interaction context menus added in a future patch, the /trade command is a temporary solution until we get to this feature.

The Trading screen is broken up into sections. The left side are the items being offered by either party.  The middle section is where you can browse your inventory, so you can better add an item to the trade offer.  The right side is a dedicated pane to look at the selected item's tool tip to learn more information about it.  The bottom of the screen contains the chat, to better communicate with the other party in trade, and it also contains the action buttons:

Your inventory browsing pane will have grayed out items when either the item is not tradable, or if you have added its full quantity already to the offer.

The Trade system has many protections in place to prevent abuse. The first of which, the trade system uses the transactional nature of databases to ensure that the trade occurs without any abuse.  This means if any part of the transaction fails, all other operations are rolled back, and the trade is undone.  The other systems, include the "Confirm Trade" button having a delay before it is enabled to avoid the other party switching the terms last minute as you are hitting confirm.

A long with the Trading system I also promised that I would rework the Illegible Teleport Scrolls if we reached last month's funding goal.  And so along with Trade I reworked the scrolls, let's dive in. 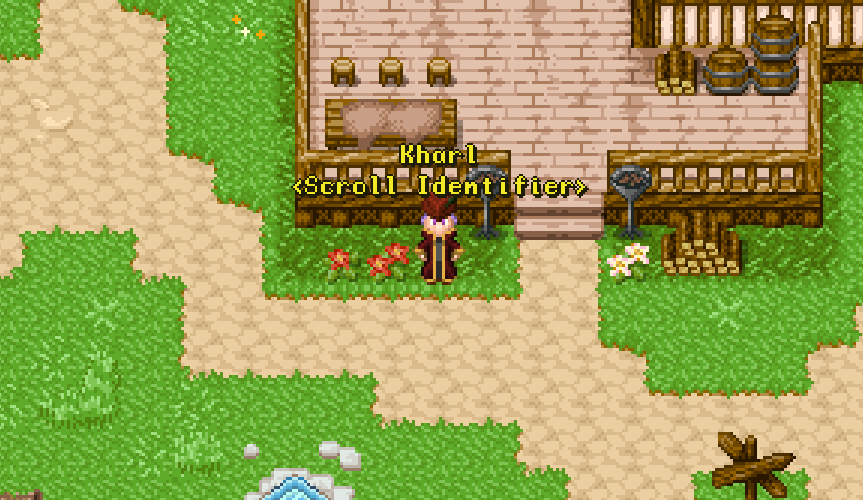 Kharl the Scroll Identifier, located outside the Inn in the Domhan Outpost.

Meet Kharl, the Scroll Identifier, a traveller who has arrived in the Domhan Outpost, and can currently be found outside the Inn.  He will gladly take your Illegible Teleport Scrolls and identify them for you.

As a result of this rework, Illegible Teleport Scrolls are no longer directly usable, but instead need to be identified by Kharl before you may use them. 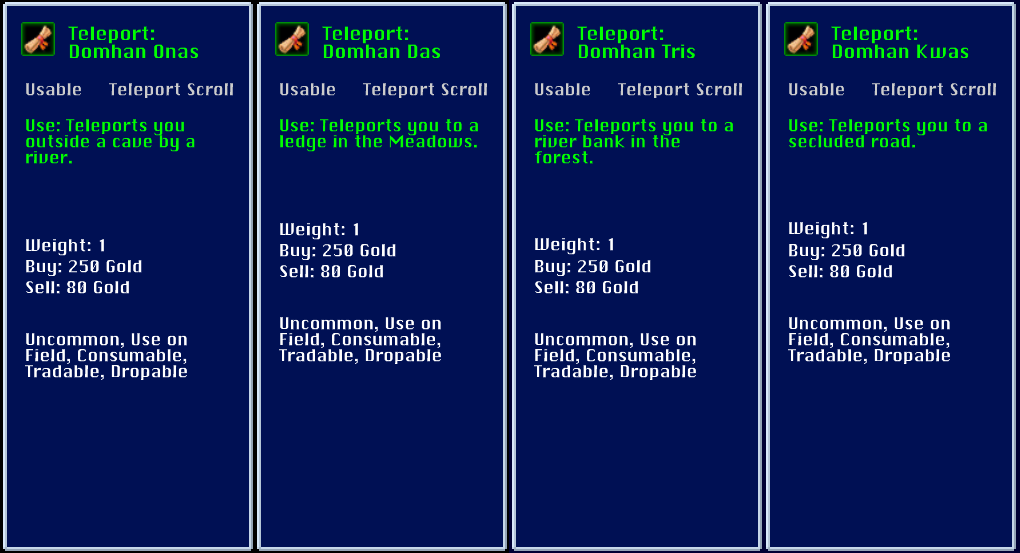 Kharl will determine if your scroll is one of four scrolls.  Each of these scrolls will now always take you to one of the four hidden locations in the game.  These hidden locations contain unreachable chests and hidden items, and are a requirement to reach the 105 Chests found Alpha 3 goal.

The identified scrolls origins are from hundreds of years ago, and whoever created them used a language that Kharl can thankfully decipher for you.   He has shared with us a little bit of interesting knowledge: what some of following words in this ancient mean.  Onas means the first, Das means the second, Tris means the third, and Kwas means the fourth.  This means that whoever wrote these ancient scrolls numbered them... perhaps in the order in which they discovered or created them? Interesting!

Hint:  Unidentified Illegible Scrolls may be purchased from Mahua the exotic goods merchant outside of the Potion Shop in the Domhan Outpost.  You may also find them rarely in chests in the world.

Since the scrolls are identified randomly, it means you may end up with duplicates. This is intended. And it should be no surprise as to why this rework was included at the same time player trading was added. It is intended for you to trade with other player's your duplicates!  You are more than welcome to use the #game-talk discord channel in the Phanxgames Official Discord to arrange trades.

Another feature that made it into Aether Story this week, is the implementation of weight management.  Before today items had a weight, and you were able to see how much weight you were carrying, but otherwise it was ignored.  Now your maximum weight is respected, and when you start to go over you will be penalized with the following rules:

If you ever find yourself slower than you would like, or unable to move, you will have to head to the nearest merchant, and sell your junk and lighten your weight. If you are unable to make it to a merchant, you can always destroy your unneeded items, or trade with other players.

Bugs that need you to confirm if they are fixed!

This is a new section, but if you are up to help us test some bugs that I believe are fixed, check out this section.  Report any problems in Discord.

Thank you for helping us test. And if you find any other bugs please let us know!

We are still working hard on Alpha 4. And just to recap, Alpha 4 is adding many awesome features: with the major ones being Equipment, Combat and the Main Story.

We will be releasing mini-pre-patches in the coming weeks adding the following features sooner than the full Alpha 4 patch:

Wow! So much work done! the game is really making progress! Good Job!!