Welcome to the full scope release of Alpha 4! The Easter and Equipment Update! For the first time in Aether Story's history you now are able to buy, trade and find equipment in the game! And equip it! Not only that, you can also equip gems to the rarer pieces, further customizing your stats!

Puffie The Puffball Bunny
Puffie loves carrots. He gobbles them up night and day, and it is no wonder why he is a big puffball. Adopt puffie yourself and have your own carrot loving furball of your own.  Donate now!

Puffie is only available to those who donate $10 or more this month of April 2021. After which Puffie will no longer be available. So get him now! Aether Story is funded by players like you. Thank you for supporting Aether Story!

Tip: Get your first set of gear by visiting the Blackmsith in the Outpost. A weapon is given as a quest reward by Axel in the South Forest. 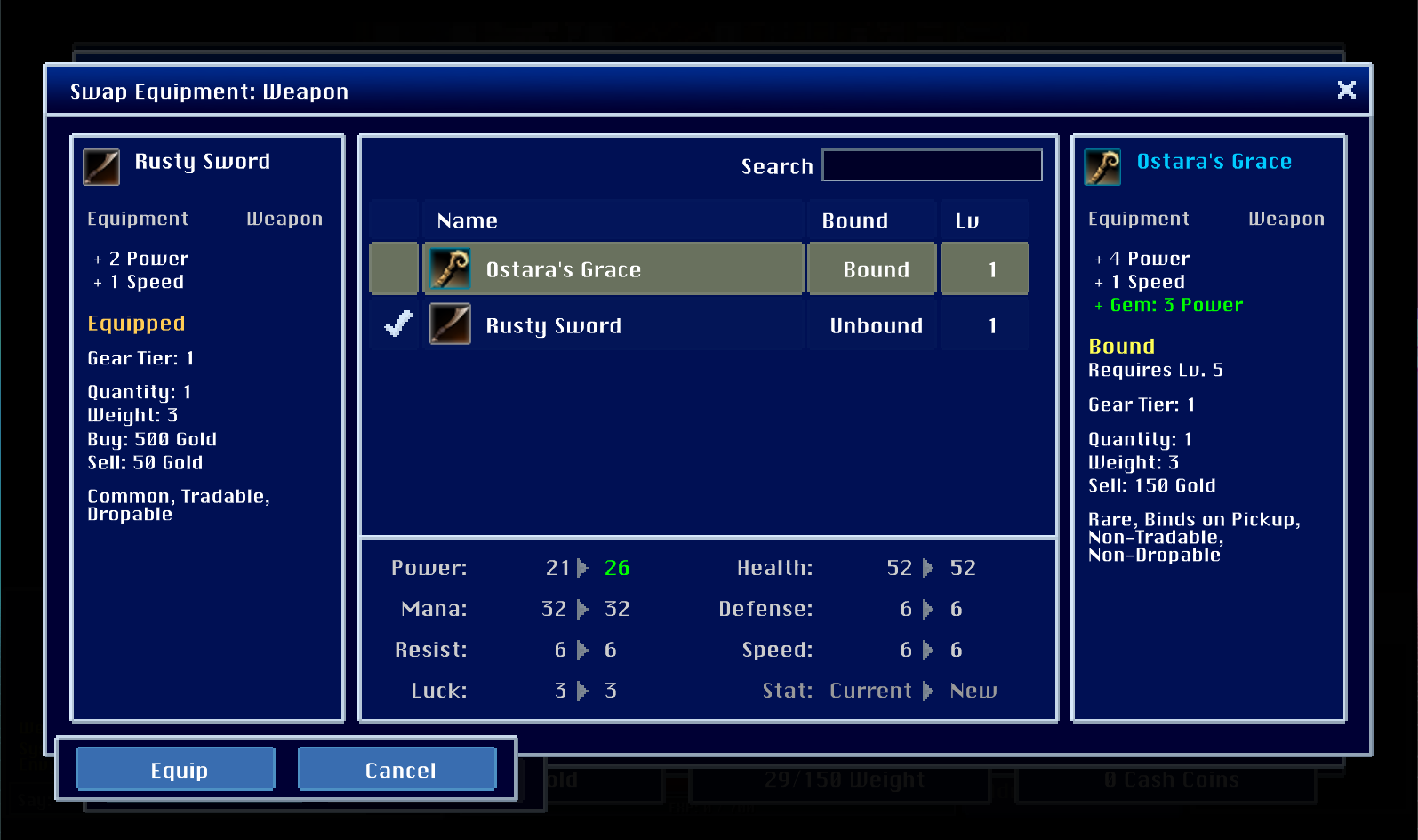 Part of the reason that equipment and battle took so long to be released is that I needed to figure out the stat model for Aether Story. I didn't want to just copy another game. I wanted to examine what made an RPG's stats and figure out what was needed to make our game.

The decisions behind why I chose these stats will be saved for a future blog post.

Easter is here again everyone! And will be until the end of the month, April 30th!

The main activity with Easter, and is carrying over from last year's Easter, is the Egg Hunt! Eggs have been scattered all over the world. In every building, on every map. Check everywhere! Eggs spawn differently from other things in the game. They spawn for everyone, and the first person to collect it gets to loot it! So you are racing each other to the eggs!

With enough eggs you will be able purchase limited time cosmetics from Maika. Maika is positioned this year outside the Command Hall in the Outpost.  She is selling all cosmetics from last year plus two new ones:

This year also added a lot of new features to Easter! Let's list them out:

Tip: If you are farming eggs, especially in a party with friends, the best place to do it is within the Easter Burrow, before Todd's Lair. The rabbits and eggs here are more group friendly.

A new area has been added to the southern forest that contains harder slimes. These slimes drop Gems, Healing Potions and a new Rare Slime pet!

Tip: If you are looking for Healing Potions visit the Witch in the Forest and gather Healing Coral daily to get new potions daily!

The Slime Glade was added to this update because I needed a secondary location for players to play in, besides the Easter Burrow cave. I also needed a location for gems to be farmed. The slimes were the perfect idea!  The Slime Glade also features a merchant in the cave leading to it. This cave is part of the same map as the Slime Glade, so entering the cave (from the Glade side) has no load screen. Allowing you to farm slimes easier and have a merchant to unload your junk at.

The Leaderboard has been updated wtih a new "Holiday" tab. This tab will rotate out every holiday season with new leaderboards designed around the goals of a holiday.  This Easter the Holiday leaderboard features new leaderboards:

Check out the new Easter Holiday leaderboard for yourself.

The Easter and Equipment patch has been out at the time of writing this post for two weeks. And boy have the players been loving this update. For the first time people are telling me, "Wow this game is actually feeling like a game." And that is awesome. I played my non-GM character and I got to experience it myself. And it really does feel like a real game. Having goals to work towards, gear to strive for, and a challenge of trying to solo the Todd boss yourself. Its one of the best updates we have had yet!

For now be sure to download the game and check out the game's current Alpha.