Sorry its been a while since the last Dev Entry, just because there has been a lack of updates does not mean work has not been continuing behind the scenes.  Let's talk about what happened in the months of January and February.  Plus what we are working on this month of March!

This New Year started off with me falling ill to a terrible flu and I didn't get much done for the month of January, but I did get a few hours in here and there, by mainly supporting Laguna with his tasks.  Laguna's main focus was getting the new zone maps created and to get the storyline finalized for the first chapter of our main story.   Laguna did an amazing job on the three new zone maps:  the beach, the meadows and the northern forest.   Laguna even started to do a weekly map stream right here on our Twitch channel, join him for Mapping Mondays at 7am EST and watch his process as the world of AetherStory is constructed.

By the time February came around I was back in full force and it was time for us to get the GUI Component library created so we could start adding new interfaces: such as menus and dialog boxes in to the game.   Our GUI library is based on a library called "Feathers", and since we are Phanxgames we decided to name our version "Pheathers".  It's very likely that we will open-source our GUI Library in the future.  But for now let me tell you quickly some of the features of Pheathers.

Pheathers adds highly skinnable pre-configured UI components based around the concept of using NineGrids for all component backgrounds and frames.  It also extends the bitmap font rendering functions allowing more style options.   However, since we are using Feathers as the base we are able to use all of the functionality of Feathers as well, such as layouts, and dozens of already working components.  I went through each component provided by Feathers and customize them to our needs if they were applicable to our game.  More on Pheathers in separate blog post at a later date.

This brings us to this month, March.  This month our goal was to release ALPHA 2.  The last Alpha release hit at the end of December, and it is well over due to publish more content for you!

Alpha 2 plans to bring lots of new content to the game, including two new maps to explore, populating the town with NPC's that will speak with you, and a few quests to give you something to do until more content is added. 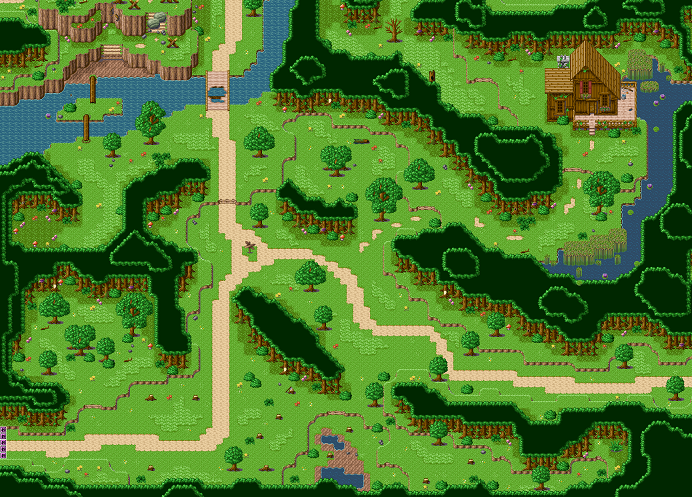 The new maps include a small road map and a large forest map.  The road map foreshadows quest about a conflict the miners are having with nearby bandits who have occupied their mine.   The large forest map is 150 by 100 tiles in size, larger than the exterior of the town, and you will be exploring it to find hidden gems and a new daily quest to find Dizzy who is playing hide and seek.

The new quests that will be added to this Alpha will reward you in the retail version of the game.  For example, by finding all the hidden gems within a single map you will unlock a reward on your account.   The reward for each quest will most likely be a "Loot Key" which you can use to get a random cosmetic item.

The reward schedule is currently planned to be:

All of this content we are very excited to get in your hands as soon as possible.  If you would like to unlock Alpha Access all you need to do is donate at least $20 and you will be added to the close Alpha.  If you do not want to donate you can always join the dev stream and enter the monthly Alpha Key give away!

We were aiming on releasing the Alpha 2 on March 18th but we sadly had a natural disaster occur that has delayed us.

On March 15th my apartment building suffered a fire that engulfed the apartment above us in a fire.  The water used to put out the fire dripped down into my apartment and the entire building has been deemed uninhabitable due to toxic environmental hazards.  I was able to convince them to allow me to retrieve my computer after a lot of fighting with the rental office.  Thankfully this does mean I can continue development and we will be able to get Alpha 2 released this month.  But we did lose a few days and are not meeting our planned release date.  For those of you who have been following us for the last year, I would like to confirm that yes this is the second apartment fire that has occurred to me in a 14 month period.

Let's try to be postive for a minute.  The fire has forced me to move and my new living arrangments have unlocked to gigabit internet, so the stream should be more stable than ever!  Also, the new location will have other people around which will encourage me to be productive and wake up at normal hours, so the dev stream will occur consistently and daily for 8 hours a day.

If you wish to support us and the development of AetherStory please consider donating or becoming our patron on Patreon.  Either way your contributions unlock many great rewards including Alpha Access, Behind-the-Scenes access, and much more!  Thank you all for your support.

I will be resuming the weekday Dev streams on Twitch most likely next week and I hope to see you all there. In the meantime be sure to join us in Discord.

A special thank you for the last three months of Patreons:
Parker, Grant, WolvesNation, Alessandro, Alexander, Mark and Shield.
Thank you all so much!